As the wine is being poured you can almost feel its rich opulence!

WHEN IN EXTREMADURA, DO AS THE ROMANS DID 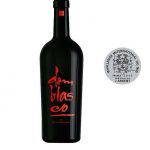 If you are having difficulty picturing amphorae, and are of a certain age, and probably male – then think back to, was it the Dandy or the Beano, comics of our youth. Remember Ali Baba and the forty thieves? Well, that’s what they used to hide inside! Clay pots for hiding treasure as well as food, olive oil and of course wine.

Occasionally these days ancient amphorae are found at the bottom of the ocean, perhaps miles away from where their ships sank whilst sailing the trade routes. Be it Phoenicians, Greeks or Romans amphorae were de rigeur in the win e world of the time. 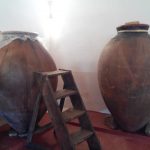 Now fast forward to Extremadura in the 21st Century, and specifically to Bodega Pago de Domblasco (http://www.domblasco.com/) and, remarkably, you’ll see the same thing. Large amphorae that have seen more than 100 vintages are being used to ferment and age wines – to this day. And to excellent effect! 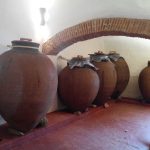 Now, a little, more modern, background – I came across these, and other, wines by virtue of a chance meeting with my now friend and colleague, Yolanda Hidalgo, when she and I shared a judging table in the year’s DOP Bullas Annual Wine Competition.

Apart from being a wine judge, Yolanda is also a wine-maker in her own right, as well consulting on various wine-making projects in several different parts of Spain, ad in Portugal. She has an interesting life, and clearly knows her wines. (http://www.ydalgoenologia.com/ and http://vinovidavicio.blogspot.com.es/).

We chatted and she told me about her wines in Extremadura, and also in the Province of Cádiz – well it would have been rude not to ask for a couple of samples!

I was both delighted and enchanted with the amphorae wines from Extremadura. The first I tasted was the silver medal winning Domblasco Garnacha, whose distinctive label and impressive bottle shape makes it stand out, before you taste the contents! Then when the cork is removed and the, initially shy aromas, start to escape genie-like (nostalgia’s not what it used to be, I’m back on the comics again) from the bottle neck, you’ll quickly realise that the flattery is not to deceive!

As the wine is being poured you can almost feel its rich opulence! In the glass it’s a dark red promising certain, captivating seduction – which is delivered on the palate. It’s full and juicy with very dark cherry aroma and even more so, flavour. There are stewed damsons in there too with a little herby and mineral note, reminding the taster of the terroir from whence it comes.

If this is typical of red wine made in Exremadura, fermented and aged in amphorae – then give me  more, please!

The shame shaped bottle and label, though different colour, contains the second wine from this old bodega, a wine that this time has had some extra ageing. Whilst the fruit is still present, this is a more mature wine, elegant, structured and with some thought provoking complexity.

Garnacha, Mazuelo and Petit Verdot make up the blend in Sueño de Facio and the wine has clearly enjoyed it’s 8 months in amphorae, as well as 6 months in a mixture of French and American oak, plus a further year and a half in bottle before its release.

This is a wine to grace the dinner table. It’s full and rich enough to pair with all manner of meats, including game, and will also be excellent with cheese, semi-curado and curado. There’s a little bay leaf on the nose plus a very faint hint of rosemary as well as some earthy mineral notes.

Fruit wise, look for plum and blueberry and, perhaps more so, brambly blackberry notes, which again make it quite a fruit packed wine. As I said – give me more!

Yolanda’s other project at Bodegas Páez Morilla http://www.bodegaspaezmorilla.com/), is near to Jerez de la Frontera, home of the Palomino, Sherry, grape variety – so it’s not surprising that Palomino figures in the white wine she makes there. Also unsurprising is that another variety in the blend that makes up her Tierra Blanca (named after the almost white appearance of the soils in the area) dry white wine, is Moscatel – which, along with Pedro Ximenth (usually shortened to PX), is responsible for the luscious dessert sherry of the area, though in this case it’s vinified dry. 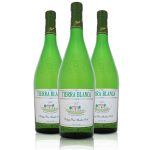 However, like myself, I’m sure you would be surprised to know that the third variety of this triumvirate – is Riesling! Yes, Riesling, the star of Alsace and Germany, where there is altitude, rainfall and freezing temperatures, all of which are notably absent from Cádiz!

This wine is a fresh and dry white, super refreshing to sip on the dusty dry days of an Andalusian summer.

I’m occasionally accused, quite rightly, I have to admit, of hardly ever writing about the semi-dulce style wines of Spain, wines that are not made as dessert wines, but wines with a sweetness for those who find dry wines to be too austere. Well Yolanda’s Tierra Blanca may well be the answer for my critics. Made with the same grape varieties, but with the final addition of some Moscatel juice to up the ante regarding its final sugar per litre count.

This bodega also makes a young red wine, Selección Don Antonio, made with Syrah, Tempranillo and Cabernet Sauvignon. For me, it was the best of the three, with good juicy fruit, some mature tannin, for a young wine and a good finish. It’s had just a few months in French oak to make it a little more serious. Easy drinking, but good for rice dishes, tapas and meat too.