“Dear Colin, last Monday, in honour of my mother-in-law’s birthday, we gave her a wine tasting on location as a surprise. With us on the porch we all enjoyed the very interesting and fun stories you told us.

Although my mother-in-law was a bit stressed (because we had told her that she might have to go Bungee Jumping or Parasailing) the surprise was more than successful and she really enjoyed the wonderful wines we tasted. The tasting on location is a must for anyone who loves wine, when we may return to Moraira next year I will definitely give you another call to come along!” 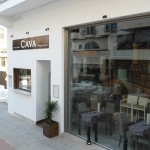 We just wanted to drop you a line to thank you for your help in hosting the two Christmas-themed wine tastings at our restaurant in early December. We wanted to showcase our wines and tapas and your involvement certainly helped us reach new customers.  Your knowledge and enthusiasm in explaining the attributes of the wines and how they complemented the matched tapas were greatly appreciated by the full house.  We have already received repeat customers as a consequence and, as you know, further bespoke tastings are on the way.
Once again, many thanks from all of us at Cava and here’s to the next one!
Best regards
Andrew and Debbie
CAVA VINO Y TAPAS
Tlf. 966 491 850
cavamoraira@gmail.com 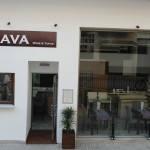 What a superb Wine/Tapas tasting we all enjoyed recently at CAVA, the new Tapas/Wine Bar/Restaurant in Moraira (near the Taxi Rank)! Hosts Debbie and Andrew had prepared tapas with an international flavour and I had the pleasure of presenting wines from the CAVA wine list to accompany them – all with a Christmas Theme! Patrons at the totally full restaurant were charmed with wines and dishes as diverse as Cava paired with Japanese style Smoked Salmon and Wasabi; and Dates stuffed with Blue Cheese alongside homemade mincemeat delicacies with the rich and full liquid Christmas PX Sherry – with another three courses, and wines, in between!

Check out CAVA next time you’re in Moraira – I may well see you there!

It’s Halloween as I write and through the office window I can see a light drizzle gently falling from all-enveloping, overcast, grey clouds bringing the land at least some succour after such a long, dry summer and autumn. This year I have no fears for my friends and colleagues at the sharp end of the Spanish wine trade who, weather-wise, have enjoyed one of the best years on record. (More soon on the 2010 Vintage!).

However I have sympathy for some of those engaged in the noble art of Champagne crafting over the Pyrenean border following some worrying news, which broke in June but simmers still. And this is far more serious than the simple vagaries of the weather!

Over 50% of a year’s production of cava and sparkling wine is sold during the Christmas period here in Spain. It is the drink of celebration and largely at an affordable price. So at the start of November the fizz makers’ commercial departments are already in full swing making sure that supplies are arriving at distributors’ warehouses. Back at base more pallets are forming an orderly queue anticipating escalating sales indicating, at least for a short period, a country-wide rejection of La Crisis!

This year there may be an even bigger demand, this time coming from consumers who normally buy their Champagne from growers near the town of Soulaines in the Aube area France. The CIVC, Champagne’s member supported representative body, has recently lost an appeal against the continuation of Nuclear waste being dumped in the area.

The court’s decision gives the green light to ANDRA, France’s national atomic agency to continue disposing of nuclear contaminated gas and liquid, but will it therefore mean a green glow in Champagne made in the area?

ANDRA is certain it won’t. Whilst it admits that there is ‘a tiny’ amount of nuclear pollution in the water table beneath the area, it insists that the levels are far below the recommended maximum. Furthermore it declares that as the water table in fact flows to the north-west and the hallowed vineyards are to the south there cannot therefore be any contamination of the precious vines, and ultimately of course the Champagne in your glass.

Greenpeace, whilst it admits that there is as yet no evidence of contamination, also states that nuclear pollution has been released into the atmosphere and into the water underground for ten years. They go on to quote the problems at La Hague, near Cherbourg, another nuclear waste facility, where, after having reached its capacity for nuclear waste storage, it was closed but still registers radioactivity readings over seven times the ‘acceptable’ level.

The plant at Soulaines has a maximum capacity in excess of that of La Hague and has already suffered, an apparently harmless, crack in its walls! Greenpeace says, “We are sounding the alarm for future dangers.” But are they also sounding the alarm not only for local producers but also for lovers of Champagne?

There is precedent. France’s Coteaux de Tricastin has recently won the right to change its name (to Grignan-Les Adhemar) in an attempt to halt a dramatic slide in sales seen as resulting from it being associated with an ‘accident-prone’ nuclear site at Tricastin! One such accident was a Uranium leak in 2008 and although subsequent tests revealed no vineyard contamination, consumers voted with their shopping trolleys!

There are no such worries for two wine producers who operate, coincidentally, only a few kilometres apart form each other in the Jalon area. Armando, co-owner with his sister, of Bodegas Parcent; and Peter and Helen Arnold of Bodegas Garroferal in Murla are both just about to introduce their first ever sparkling wine. (They cannot be called Cava as neither bodega is in the officially demarcated cava producing area and in fact each fizz will use an unauthorised grape variety, but the method is the same).

I feel rather privileged to be amongst the first to taste both these brand new sparklers very soon! Readers in the area will also be able to do the same with Bodegas Parcent’s as I’ll be co-hosting a bodega tour and tasting with Armando where his new ‘vino espumoso’ will be launched!