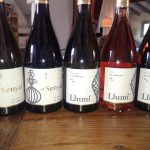 One of the things I like most about the new British owned and worked bodega Celler Alimara (http://celleralimara.com), is their quite obvious ‘connection’ with the vineyards they work. I’m talking here of their laudable belief in the concept of ‘sustainable wine making’; the soils in which the vines grow; the microclimates involved; the long (that’s 2,000 years!) history of grape growing in the area; and the successful marriage of tradition with modern expertise – a winning formula oft referred to here in Cork Talk.

Another thing I like – their wines! And it’s in their, as yet, small portfolio that you can smell and taste the connection – their wines speak of their terroir as much as they speak of the varieties used.

This fledgling winery is owned by the wife/husband team of UC Davis and WSET educated, Ali and Andy McLeod, with significant input also from Andrew Halliwell, accomplished itinerant (that’s in five continents!) consultant wine-maker. The final team member is Celler Manager, Blanca Polop and together they made their first wines in 2016. I’ve tasted them all, and I’m predicting a big future for Celler Alimara in DO Terra Alta, which may be termed as something of a sleeping giant of a Denominación de Origen.

In the more economically priced range, Llumí, there are three wines – a white, a rosado and a red, using, respectively: Macabeo and Garnacha Blanca; Garnacha; Syrah and Tempranillo. If my maths is correct, none of these wines will cost you over 5€ – and believe me, this is a steal!

I first tasted the Llumí rosat (rosad in Catalan) – we were having a red lentil vegetarian dish that night and it seemed appropriate. I was quite right (see and hear it here www.youtube.com/watch?v=ppCnEcitS5U, or just go to Youtube and search Colin Harkness On Wine)! A slightly under-ripe strawberry on the nose (not over-ripe which can sometimes mean a little too much residual sugar in a rosé wine), which follows onto the palate, to be joined by pomegranate and fully ripened cranberries. Will work very well with trout and salmon, fresh tuna too, rare/medium rare.

Llumí Blanc is a blend of Macabeo and Garnacha Blanca. Although Macabeo is widely grown in the rest of Spain, it’s natural home, along with Garnacha Blanca, can really be considered to be Cataluña. The two together work well – a faint green and crisp apple aroma, though a little more forthcoming on the palate, with a lemon freshness and some conference pears coming to join the party with a faint blanched almond reference too. I note also a stony mineral element on the finish – enhancing the overall effect, taking the taster to the vineyard.

I just loved El Senyal Blanc – a Garnacha Blanca monovarietal that has clearly enjoyed its six months with its lees in a large oak barrel (foudre)! A big white, with depth of flavour – that’s citrus fruit and banana, skin and fruit, with blanched almonds, and freshly rained upon grey slate and granite minerality! Shellfish, full flavoured fish with sauces too.

El Senyal Negre 2016, whilst drinking very well, is also, I believe, a work in progress – I’d love to taste this wine again in two years, and more! Each of the three varieties in the blend – Garnacha Negra, Garnacha Peluda and Cariñena – are fermented separately in stainless steel, then aged in oak barrels, 20% of which are new. The balance here is perfectly judged – the new oak makes a valuable contribution, but doesn’t steal the show. The older oak gives greater depth to the wine, as well as complexity. The dark brambly fruit is to the fore, with leafy undergrowth notes proving the direct link with the soils in which the 30 yr old vines are grown.