Nowadays in Spain the new generation of winemakers, well those with the wherewithal at least, often leave the country of their birth to work various internships in order to gather more experience and to learn new/different techniques . . .

It’s largely an obsolete term nowadays, but there was a time when wines were sometimes referred to as having ‘good legs’. If holding a glass of wine at an angle you’ll note it ‘lining’ the glass when you return it to the vertical. After a while it will start to drip at various places, these are called, rather romantically, the tears, or sometimes the legs.

They relate solely to the alcohol content of the wine are not an indicator of quality. However, firstly, I couldn’t resist the title above – many readers will know that the Spanish word for legs, is ‘piernas’; and, in this case, the wines of Jorge Piernas, do have ‘good legs’ – and they are of exceptional quality!

When I visited Bodegas Jorge Piernas in the sleepy, but now awakening Bullas area, the man himself was in South Africa! Nowadays in Spain the new generation of winemakers, well those with the wherewithal at least, often leave the country of their birth to work various internships in order to gather more experience and to learn new/different techniques. 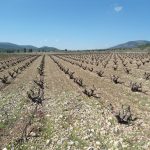 As I’ve said before in Cork Talk, this is an amalgamation of knowledge and experience – they learn firstly from the generation(s) that preceded them; then it’s off to University/Wine College to study the science etc and receive their degrees/diplomas; then they get their hands dirty whilst performing back-breaking pruning etc in the vineyards; then they are party to the making of the wine, wherever they may be, under the direction of the head winemaker – in whatever language! Fascinating, and rewarding for them – and ultimately for us, the consumers!

When young Spaniards follow this route into Europe, it’s hard for those left at the bodega – the strong and committed youngsters can’t pull their weight, if they’re not there.  In fact they’re doing that, for somebody else! So, as the various facets of the wine season are wholly different in the Southern Hemisphere, if a young buck can find a placement down south, it really is the best of both worlds/hemispheres!

Jorge Piernas has done both! To name but a few Jorge has worked vintages in: New Zealand, Argentina, and South Africa in the south; USA in the north, as well as different European countries, including Spain’s La Rioja where I believe he helped make the legendary wines of Bodegas Artardi – who have now left the DOCa Rioja! And, here, there may be a link!

Whilst the wines from Jorge Piernas (currently there are just two in the portfolio, but what wines!) come from 40+ yrs old vines near Bullas, and are crafted about 20k away in Mula, they have eschewed the idea of bringing their bodega under the auspices of DOP Bullas, to the apparent chagrin, I think, of the Consejo Regulador. Thus their wines are labeled simply as ‘Red Wine Produced in Spain! But don’t let that be a concern, their top wine is priced, economically in my view, given its quality, at about 25€. We aint talking also-ran Vino de la Mesa here!

Ten, and more, years ago, in Spain, such move might have been considered tantamount to being suicidal. To have made a wine considered to be at the quality level of a Denominación de Origen and to be able to place the name of that DO on your label, was a real sign of success.

It still is – mostly! But there are other wines, as Cork Talk readers know, that are made independent of the protection and also the constraints of the local DO that are equally good, and sometimes, often(?), better. Wines labeled VdlT (Vino de la Tierra) for example have oft been championed in this column. Also, I know of one wine which was labeled Vino de la Mesa, yet was the flagship wine of the bodega, selling at 35€/bottle.

Also, more and more often we are hearing the term ‘Vino d’Autor’ – in other words a wine that the head winemaker wants to make, according to his requirements, full stop! If the result ticks the various DO boxes, all well and good; if not, well that’s good too. For example, as written here a few months ago, we are seeing fewer producers putting ‘Crianza’ and ‘Reserva’ on their wines these days – they may fulfill the necessary requirements but the winemaker would prefer to be aligned with more modern ideology. 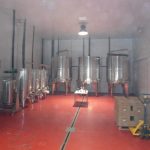 ‘Parcelario’ wines is a fairly new term, but gaining in use. In fact, it’s more likely, given that English is the language of wine commerce, that the translation would be used, ‘Single Estate’ wines. And this, my friends leads me, you’ll be glad to know, to the Parcelario Vino d’Autor wines of Jorge Piernas!

Jorge was away as you know, but his father Antonio, stepped into the breach – well firstly the vineyard and then the bodega facility!  Like father, like son – both are clearly passionate about their, well, passion! I enjoyed talking wine for the whole time but I had to be careful to remain impartial later when tasting, so contagious was Antonio’s fervor!

It was a privilege to be given the premium tasting, and fascinating too! However, space restrictions don’t allow me to give full justice to such a tasting, despite their nominally being only two wines produced here! You’ll read why, next week! Don’t miss it, these wines are outstanding!     (www.jorgepiernas.com)

The next Fine Wine & Gourmet Dine Programme on Total FM 91.8, sponsored by Bodegas & Boutique Hotel, Casa Boquera (www.casaboquera.es), will be on Sunday 21st May from 18:00 – 20:00 hrs. My studio guests are founders, Katherine and Harald, and I will be chatting about this young bodega, it’s two Gold Medals for their first wine(!), the luxury hotel and their plans for the future!