Just as the jeans-clad, ponytailed Pablo Iglesias, Secretary General of the nascent Podemos Political Party, strolled defiantly into the be-suited parliament, post General Election, demanding change; so too is the younger generation of vine growing, wine making dynasties seeking, at least modification, at best(?) a radical overhaul of the system.

As we approach the 2020’s the, once very conservative, Spanish wine scene is slowly being turned upside down – a reflection perhaps of the current political state of the nation.

Just as the jeans-clad, ponytailed Pablo Iglesias, Secretary General of the nascent Podemos Political Party, strolled defiantly into the be-suited parliament, post General Election, demanding change; so too is the younger generation of vine growing, wine making dynasties seeking, at least modification, at best(?) a radical overhaul of the system.

DOs: La Mancha, Utiel-Requena, Cava and others, including the iconic DOCa Rioja, have all recently seen prestigious bodegas jumping ship and going on their own. There will be more – mark my words – before those indolent, stuck-in-the-mud and stagnating Denominaciónes de Origen finally realise that, in a dynamic national and world-wide wine scene, there has to be, first reflection and then meaningful change.

One of the changes over the past decade, and more, that has occurred, and very successfully too, is the fact that Vino de la Tierra wines can no longer be considered to be in some way lesser than wines labelled DO. In fact, in some cases, it’s quite the reverse – which should be high on the agenda of those DOs who are now embarking on a course of reflection, as above.

Their labels, as well as their name, are give-aways re this bodega’s philosophy and, to a point their method of vine growing and wine making. Phases of the moon are depicted on the labels, and it’s this phenomenon, observed first at the dawn of man, that is central to Bodega Dehesa De Luna.

It’s not yet true to say that Bodegas Dehesa De Luna is a biodynamic bodega, they may never make that transition. However it is clear that their approach to vine tending and wine making goes beyond just organic principles. A look at their website will show that they are in tune with nature – they care about the land that they share with plant and animal life. And, it shows in their wines.

Luna Lunera Tempranillo 2014 (just 4€ from the online shop!) is made exclusively from Tempranillo, Spain’s darling, noble grape variety (though, for me it should be considered as, one of  . . ). The 2014 growing season saw a considerable elevation in temperatures, with a simultaneous, unfortunate drop (excuse the pun!) in rainfall, which us usually low anyway! The result was that as the vines were under stress, the grapes had to be harvested early. However, a suffering (but not too, too much) vine will produce excellent grapes for wine making. Thus the 2014 Luna Lunera is particularly lush on the palate. 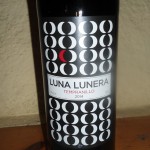 It’s a darkly coloured wine, clean, bright and attractive in the glass. On the nose there are some violet, floral aromas with some dark berry fruits, blackberry and blueberry,  coming through. On the palate this fruit, aided and abetted by lighter coloured, ripe strawberry and loganberry, takes centre stage. It’s so juicy it almost sings!

It’s a semi-crianza, roble, red wine whose brief 3 months ageing in French and American oak has influenced the nose a little (traces on vanilla and a faint smokiness) and the palate too where you’ll  note a touch of toasted wood, along with some back-up smokiness. I appreciate the food-compatible, slightly bitter liquorice on the finish, which rounds off a wine to simply drink as well as enjoy with perhaps pasta, chicken and pork, as well as tapas, of course!

Dehesa de Luna 2013 (8€), which has a month’s phases of the moon as a centre-point on the label, is a step up in complexity and depth. A more serious wine, yes, but still having the byline – fruit first!

The Spring of 2013 as unusually cold and took its time to warm up into Summer, consequently vine development, front flower formation onwards, was delayed. The harvest, depending on each of the varieties involved in this wine – Tempranillo, Cabernet Sauvignon, Syrah and Petit Verdot, took just over 2 weeks and was a touch later than normal, whilst waiting for the fruit to mature fully.

The result is a wine that has, for me, a slightly French spin to it. Tempranillo is a very Spanish variety (although now grown all over the world, though not that I’ve heard of in France!) of course, but its bedfellows have a distinct French accent! It’s quite a full and rich Spanish red which also manages an engaging elegance, and I believe, eloquence too.

The aim of Bodega Dehesa De Luna is to create wines to speak of their terroir. The land between the rows of vines are covered with low lying overgrowth which attracts insects who also attach vine pests. This cover also helps contain what little rainfall there is, whilst  also encouraging the vines to dig deeper into the earth. Then, when the harvest is over this growth can be be dug into the soil to help replace any lost nitrogen. Healthy soil means healthy vines and of course there is a pleasing sustainability about the whole project. 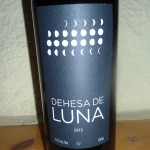 Once the various varieties have finished their fermentation in stainless steel, with malolactic fermentation following, the master blender gets to work before the wine is finally placed in 225 litre barrels, where is stays for a period of about 6 months. Barrels are tasted to decide when is the exactly right time to bottle – then the wine is ready for the market.

And, whilst it’s drinking very well right now it will reward those who are prepared to wait at least a year (try three!) when  nit will have developed still further. Right now there is a very good all dark fruit presence, blackberry and blackcurrant with faint blueberry notes too. There is a touch of undergrowth on the nose which also underpins the rich fruit when the wine is held on the palate. There are toasty oak notes, though shy at first, and you may just feel, rather than taste, a slight Syrah based black pepper element too.

Don’t forget also that Colin has his own fortnightly radio programme on www.totalfm.es Total FM 91·8 from /pm – 8pm Spanish time. The next Fine Wine & Gourmet Dine Programme is on Sunday 20th March, sponsored by DOP Yecla and Bodegas La Purísima, two of whose wines he’ll be tasting on-air whilst also sampling tapas from Restaurante Nesfor, Javea. You’d be mad to miss it!